Average reading time for this story is 3 minutes

Renewable energy is increasingly becoming cheaper than that derived from thermal power plants. However, a major problem with renewable energy sources such as solar is the mismatch between energy generation and consumption. For example, consider a solar rooftop photovoltaic (SRTPV) system serving an electric vehicle (EV) charging station. While solar energy is generated during the day, EVs may also be charged during the night. This mismatch naturally creates the need for energy storage that can store the excess energy generated for use during times of higher demand. This is referred to as time shifting of energy. However, energy storage systems increase overall system costs, thereby making the integration of renewables costlier. Net metering is a powerful mechanism which can facilitate energy time-shifting by the electrical grid with zero additional costs. The following section explains how this is achieved.

How does net metering facilitate energy time shifting through the electrical grid?

Net metering was introduced to encourage the adoption of grid-connected SRTPV systems by incentivizing the export of excess energy to the grid. The setup requires a bidirectional meter which moves in one direction when energy is imported and in the opposite direction when energy is exported to the grid. The net meter displacement at the end of a billing cycle is noted for generating the electricity bill. This simple accounting method allows the grid to provide an energy storage service within the billing cycle. The following example will explain this concept better.

Consider a case where the total load to be served daily is around 100 units (1 unit is equal to one kilowatt-hour or kWh). Assuming 5 hours of average daily generation (in areas such as Bengaluru), a 20 kWp (kilowatt-peak) RTPV system will suffice. The schematic in the figure below gives a snapshot of the operational details of a grid-tied RTPV system that can serve such a load. On Day 1, for example, a total of 100 kWh energy was generated. Of this, 50 kWh was used during generation and the remaining 50 kWh was exported as excess energy during daytime. Thus, a net energy of 50 kWh was imported from the grid (denoted by a negative sign). 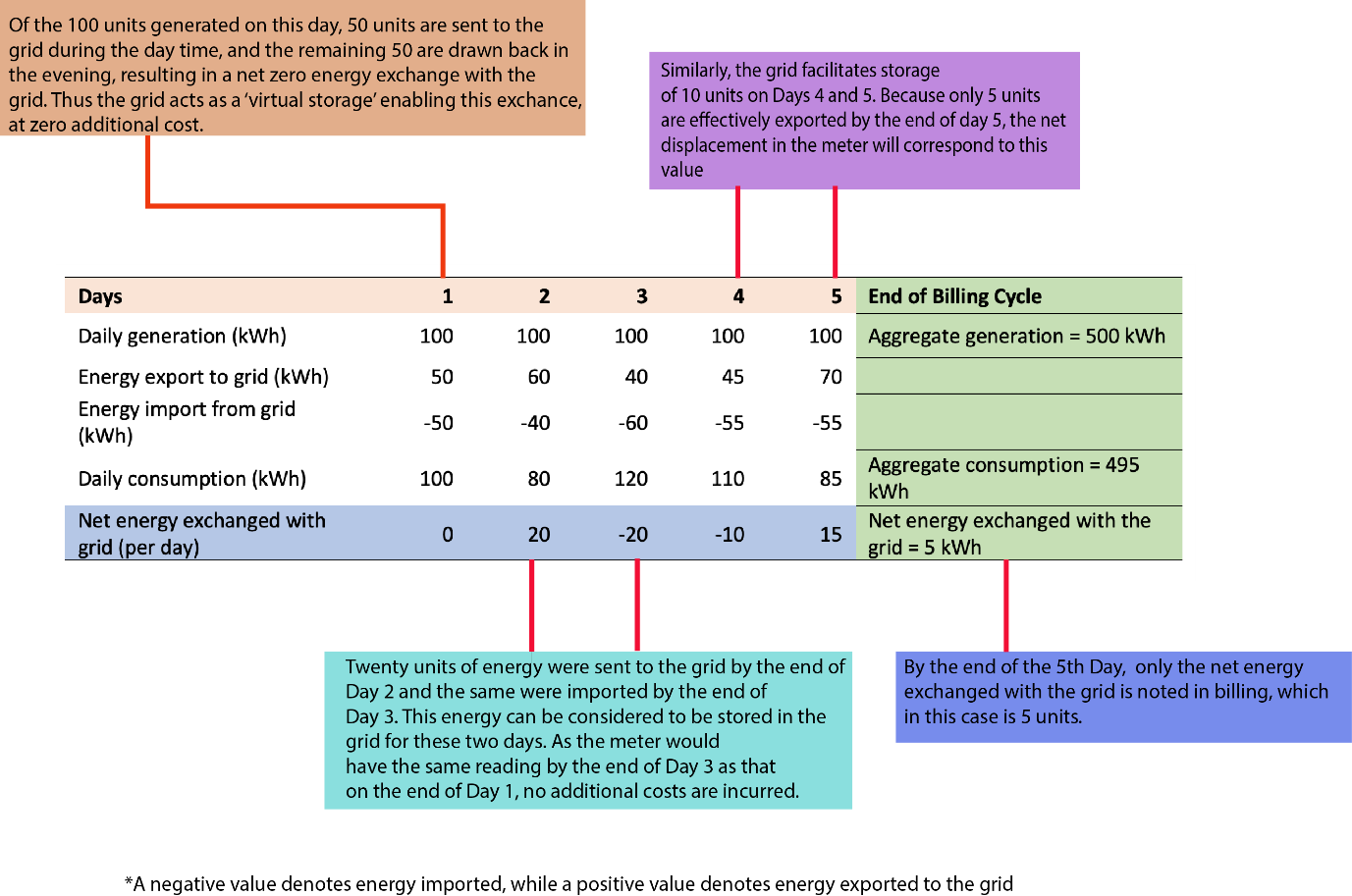 While a 5-day billing cycle has been used to keep the example short, the arguments hold for a billing cycle of any length. The schematic elucidates a number of instances where the grid acts as a proxy for energy storage. For example, consider the total load across Days 2 and 3, which is 200 kWh. This load is effectively met by the total solar energy generated over these days during which 20 kWh is exchanged with the grid. As the net displacement of the metering device remains the same by the end of Day 3, no additional costs are incurred. In other words, the grid provides the service of energy time shifting across these days for zero cost. This practically nullifies the business case for any kind of dedicated energy storage system for this application. At the end of the billing cycle, only the net energy exchanged with the grid (denoted by the net displacement of the metering device) is used to generate the bill. Thus, under the net metering scenario only the RTPV system size needs to be matched with the total daily load, without worrying about any mismatch between energy generation and consumption within a billing cycle.

When is a dedicated energy storage system required?

Note that the above arguments are applicable for energy storage through the energy time-shifting application. Storage may be considered for other scenarios or applications such as

The time-of-day tariff represents different electricity costs at different times of the day. For example, Uttar Pradesh is one of the few states in the country to have a ToD tariff for EV charging. The tariff from 11:00 to 17:00 hours is INR 7.7/kWh (for LT consumers) which gets costlier by INR 1.155/kWh between 17:00 and 23:00 hours. In such a scenario, the lower-cost energy can be stored for use during peak-rate durations. This suggests that (in this case, for UP) the levelized cost of storage should be lower than INR 1.155/kWh to save on electricity bills.

Energy storage applications can be broadly classified into two categories: behind the meter (BTM) and front of the meter (FTM). The use case presented above is an example of a BTM application, wherein the main objective is to save on electricity bills of the end users. In an FTM application, energy storage systems mainly serve the grid with applications such as power quality management and frequency regulation.